ANY WEIMARANER OWNER SHOULD READ THESE

Please watch the video on signs of Bloat- Scroll to bottom

Gastric Dilatation Volvulus or "Bloat" occurs in many deep chested large breed dogs (including the Weimaraner).This is a report of a presentation by Dr. Larry Glickman, an epidemiologist at the School of Veterinary Medicine, Purdue University, who has been studying canine bloat for a number of years. Dr. Glickman has been following a study group of 1600 individual dogs from 11 different large and giant breeds. Dr. Glickman's findings suggest that much folklore about bloat prevention is wrong. Specifically, he noted that:

~ Raised food bowls doubled the risk of bloat~ Stress was not in itself a factor in susceptibility to bloat, but how dogs handle stress can increase their risk.

Diet does seem to be a risk factor. Glickman noted that the United States has seen a 1500% increase in bloat over the last 40 years, with certain breeds at greater risk (e.g., about 40% of Great Danes will have an episode of bloat at some time in their lives). In contrast, Australia has a very low incidence of bloat. The difference, Glickman argues, is in feeding methods. Australian dogs have a different diet (different commercial feeds, more home-cooked food) than American dogs.

While age is certainly a factor in susceptibility to bloat - older dogs are more likely to bloat than younger ones - genetics also plays a significant role. Risk increased for dogs with a first degree relative who had bloated.

~ Do not feed high-fat food

~ Do not feed from a raised food bowl

~ Do not add water to dry food

~ Do not feed foods with citric acid; or, if feeding such foods, offer them dry.

~ Provide more than one meal per day

The symptoms of bloat are well known: restlessness, salivation, pacing, labored breathing and other signs of physical distress. Some dogs may also have a distended belly. Not every dog shows all these symptoms -- in fact, some may show little or no evidence of discomfort. It is vital for owners to be aware of what is normal for their dogs, as bloat is ALWAYS a medical emergency.

Those who live some distance away from veterinary facilities should learn how to pass a stomach tube; a veterinarian can demonstrate this procedure. Further information about the Purdue Bloat Study is available on the web at www.vet.purdue.edu/epi (Source: National Health Symposium, Memo to Members, Irish Setter Club of America August 2002)


The article below was written by the Weimaraner Club Of Victoria's Research Officer in January 2003.


B L O A T-
A MAJOR PROBLEM IN THE WEIMARANER
Bloat or Gastric Dilatation and Volvulus is a common problem in the middle aged or older Weimaraner and has been more frequently seen in those that are nervous or highly strung .

Bloat is often seen to begin after a large meal or after a large drink, particularly after exercise. The dog often presents with the following symptoms ... hunched abdomen, drooling, restlessness, pacing, groaning and making attempts to vomit.

Internally the stomach is very distended and may have twisted. This prevents gas and food moving into the small bowel or being vomited back up. Significant changes in blood flow and shock soon set in and without treatment the dog soon dies in distress.


If there is to be a reasonable chance of survival

veterinary attention should be sought immediately.
The exact cause of Bloat is unknown but it is believed that it involves a problem with abnormal stomach motility. With a motility defect, food has a longer than normal stomach retention time leading to distension. Over time, repeated distension of the stomach leads to stretching of the ligaments which normally hold the stomach in place. If the ligaments are no longer able to stabilise the stomach, it is free to rotate when distended and this leads to Gastric Dilatation and Volvulus.

Treatment of the condition is very complicated and consists of several steps. These steps are decompression, shock management, surgical stabilisation and recovery. Treatment of each dog is undertaken on an individual basis and is dependent upon the response to the previous step.


Bloat
Decompression is managed by inserting a large bore hypodermic needle through the abdominal wall and into the stomach to relieve pressure. An intravenous drip is then started and fluids are administered at a rapid rate. Drugs to assist in controlling shock are then administered intravenously along with antibiotics and drugs toassist with stomach motility. A sedative is given and a tube is passed down the throat and into the stomach to further relieve pressure and remove the stomach contents.

The dog is then assessed and if stable, is prepared for surgery. The decision to perform surgery immediately, has in our practice, led to more successful outcomes, when compared to waiting until the dog may be a little more stable. Surgery involves opening the abdomen and carefully examining the abdominal contents, particularly the position of the stomach and the spleen. The spleen is often very enlarged and its blood supply damaged. It is commonly removed, to facilitate repositioning of the stomach. The stomach wall is very carefully examined for signs of haemorrhage and is then repositioned if twisted.

To avoid future bouts of Bloat the outlet of the stomach is enlarged to allow easy passage of food into the intestine and the stomach is fixed into a normal position by suturing it to a rib. After surgery and for the next 24 to 72 hours the dog is carefully monitored for heart problems. It is common for dogs to die in this period from the effects of shock and cardiac arrhythmias (irregular heart rhythm). When the dog is able to drink and eat small meals, it is discharged.

The Weimaraner is one of the most common breeds to encounter Bloat and we have seen it in dogs as young as 20 months. Bearing in mind the stress and suffering to the dog and the relatively high mortality of the condition, we are now advocating that owners consider preventative surgery rather than waiting for Bloat to strike and then trying to treat it.

B l o a t-
GASTROPEXY AS A PREVENTION
Preventative surgery has been extremely successful in eliminating future attacks of Bloat and can be done when the dog requires anaesthesia for other reasons such as neutering.

In the young dog there have been no ill effects reported following a Gastropexy and recovery from surgery has been routine.

The high occurrence of Bloat in the Weimaraner and the serious nature of this disease is causing more owners to take advantage of surgical prevention, rather than running the risk of Bloat in later life.

HOW DO I AVOID BLOAT?

1.Preventative surgery, Gastropexy.
2.Feed at least two or more small meals per day.
3.DO NOT Pre-soaking dry food before feeding it to your dog.
4.Do not allow your dog to drink large quantities of water immediately before, during or after exercising. Small volumes of water are quite alright, about a cupful or two at a time, or if the weather is very hot provide some ice.
5.Do not exercise immediately after feeding.
6.Remember 'Bloat' is best avoided,but if it occurs urgent veterinary treatment is essential to have a reasonable chance of survival.
Dr. J.D. Jedwab January 2003
BVMS., BSc. Hons (Phys.) Copyright Reserved


The Weimaraner club of SA has the opportunity of purchasing anti-bloat bowls. These bowls are specially designed to slow down the rate that a dog can eat. Cost will be $18 each or 2 for $30 (Plus Postage) with normal retail prices between $25 - 30. They could also picked up at our Double weim champ show in July. To order please contact Waldwiese Kennels-  Lois Richter on lrichter@bigbutton.com.au Or Claire Richter on claire@weiclubsa.com
Comes in white and Blue 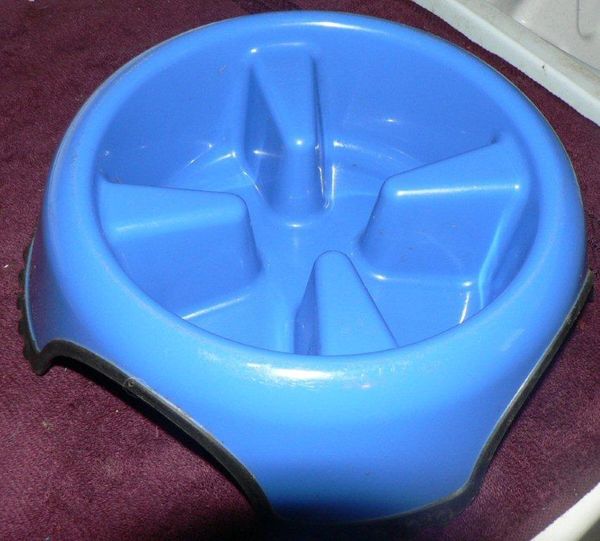