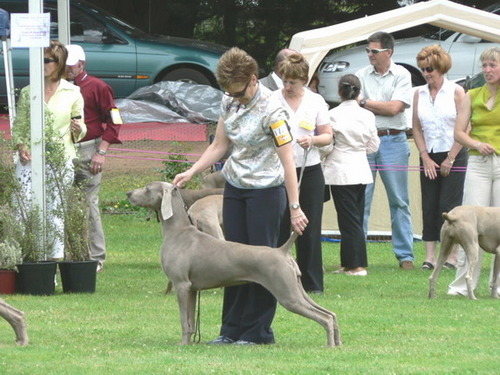 'Indiana'...what can I say about this whirlwind. Sold as a pet, her

owners, Damien and Cheril Hann brought her to see us at about 9

months of age and we convinced them to let us show her. At 10 months

then RUNNER UP BEST IN GROUP. At nearly 2 years of age 'Indi'

obtained her show title..... not bad considering she has had to compete

against Miss Perfect Show Girl Grayce. Along the way she has won

decided to behave. At her last shows in September she won Reserve

Challenge at the 2006 Adelaide Royal and the following day, BEST

EXHIBIT IN SHOW at the SA Weimaraner Club Championship show.

"Indi' was superbly handled by Suzy Mayhew (Bromhund) at both shows.
Now retired, 'Indi' enjoys her days with her sister 'Miss B' and the Hann